The William Hoy story : how a deaf baseball player changed the game 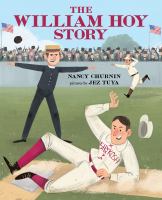 The William Hoy Story : How a Deaf Baseball Player Changed the Game
by Churnin, Nancy; Tuya, Jez (Illustrator)
Rate this title:
vote data
Click an element below to view details:

The William Hoy Story : How a Deaf Baseball Player Changed the Game


All William Ellsworth Hoy wanted to do was play baseball. After losing out on a spot on the local deaf team, William practiced even harderâeventually earning a position on a professional team. But his struggle was far from over. In addition to the prejudice Hoy faced, he could not hear the umpires' calls. One day he asked the umpire to use hand signals: strike, ball, out. That day he not only got on base but also changed the way the game was played forever. William "Dummy" Hoy became one of the greatest and most beloved players of his time.
► Shelf Browser
► MARC Record
◄ Search Results Showing Item 1 of 1