The catalog will be undergoing maintenance starting at 6 AM Sunday, October 24 and lasting several hours. There may be an interruption in service during this time. Thank you for your patience.
Home Best Sellers & Award Winners Nutmeg Awards & Nominees Charter Oak Children's Book Award Kids Catalog Get a Library Card 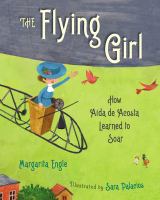 The Flying Girl : How Aida de Acosta Learned to Soar


In this beautiful picture book filled with soaring words and buoyant illustrations, award-winners Margarita Engle and Sara Palacios tell the inspiring true story of AÃ­da de Acosta, the first woman to fly a motorized aircraft. On a lively street in the lovely city of Paris, a girl named AÃ­da glanced up and was dazzled by the sight of an airship. Oh, how she wished she could soar through the sky like that! The inventor of the airship, Alberto, invited AÃ­da to ride with him, but she didn't want to be a passenger. She wanted to be the pilot. AÃ­da was just a teenager, and no woman or girl had ever flown before. She didn't let that stop her, though. All she needed was courage and a chance to try.
► Shelf Browser
► MARC Record
◄ Search Results Showing Item 2 of 2
◄ Previous